The front part of the Scout reserve contains the Ranger’s House, a chapel and 2 large, heated facilities, Burr and Beaver Lodges. Burr lodge contains a kitchen and dining area, seating 50 people. Near Burr are 3 concrete block, heated cabins, to sleep 18 campers. Behind Burr Lodge are 2 Adirondack circles, each consisting of 6 non-heated cabins, each with 6 bunks. There are 2, new heated, M/F, washrooms with hot water and shower facilities.

One is wheel chair accessible. Beaver lodge consists of a kitchen, a dining area seating 40+, 24 bunks, and 2 indoor washrooms and 1 shower.

The Chapel, tucked into the woods, is named “Ween Mal Ga Mic”, which means “place of prayer” in Ojibway, recognizing the culture of the present First Nations community which is nearby. They replaced the original native population at settlement, more than 400 years ago, who were known as the Attawandaron. We intend to renovate the chapel to also accommodate an educational centre for the environment.

The middle part of the Scout Reserve, in a fairly flat area, is surrounded by forested sand dunes. There are 10 large, designated tenting areas, capacity of about 75 campers each. There are 6, heated cabins in this area, maintained by Area Scouting groups, sleeping between 15 – 25 campers. These are available for rental. There is a 30 foot tower that accommodates a 20 foot rappel and a 24 foot climbing wall. The Camp has 16 canoes with life jackets, paddles and safety kits which are stored near the Ausable Cut. This waterway also accesses the Pinery Provincial Park and Lake Huron. The river is slow-moving and is ideal for beginner canoeists. Tobogganing in the winter is excellent and very popular, as is snowshoeing.

The north part of the camp is the bottom lands of the former Ausable River. Much of this area (called ‘the flats’) is ideal to run around in and explore. It is used as an event area for camporees and is an excellent place to star gaze at any time of the year. Groups have access to volleyball nets and balls. 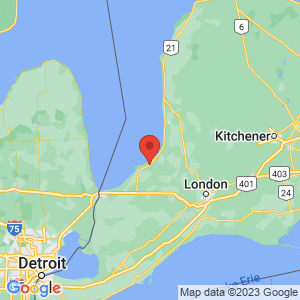