The host and organiser Shaki scouts held a spring camp on 24-27th of March in Shaki city with the help of Baku scouts.
121 people have joined from 5 regions ( Turkey (TIF), Baku, Ganja, Sheki, Shamkir, Goygol ) to the " Pearl camp " camp which have already been organized 2nd year with the same name and planned to attract new scouts.
Most of the participants were new. The camp program was consist of teaching the history and goals in scouting, riding a horse (Chovkan national polo), archery ,mountaineering and rock climbing, first aid, necessary equipment to survive in nature for scouts, orienteering, scout nodes, visit the city's historical places, the history of Shaki and its crafts (network designing-decorative tiles, fountains and several stained-glass windows , pottery, jewelry) ,visiting the Martyrs Avenue, park cleaning in Shaki city, planting trees, placement of bird nests actions and other activities.
At the end of the camp "Shaki Culture Night" was held and sweets and handicrafts that inherent to Sheki were shown.

Brief information about Shaki city:
Shaki is a city in northwestern Azerbaijan and surrounded by snowy peaks of the Greater Caucasus.
Perhaps the best-known aspect of Shaki cooking is its rich sweet dishes. Shaki is traditionally held as the home of special type of baklava, called Shaki Halva.Others include nabat boiled sugar and sweet pesheveng.
Shaki hosts a wealth of historical museums and some of the most important in the country.
The city is home of annual Mugham Festival and Silk Road International Music Festival.
Architecture in Shaki has largely been shaped by Shaki's history. It goes back to a time, when it was a market centre on the Silk Road, linking Dagestan, Russia to the northern trade routes through the Caucasus.
The city's central and main open city squares are dominated by two Soviet towers.Many public places and private houses in Shaki are decorated with shebeke, a wooden lattice of pieces of coloured glass, held together without glue or a single nail.The technique is complex and known only to a few artisans who pass their meticulous craft from generation to generation. 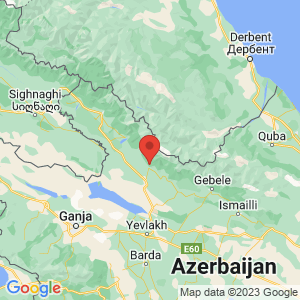