The centre is south of the largest lake area in Germany and is situated within the ‘Rheinsberger Seenlandschaft’ which is a lowland area of large lakes and forests. It lies at the end of a Peninsula which only includes some small villages, but huge areas of forests and meadows. The environment is characterized by the typical terminal moraine of the Mecklenburg Lake District with bogs, outwash plains, heaths and deep pine forests of beech and Douglas fir stands.

The campsite itself includes areas for camping as well as different forest types, ponds, lakes, meadows and endangered agricultural areas. All of these habitats support native species, especial some endangered plants, locally endangered insects, breeding populations of endangered birds, hibernation of bat species or serve feeding habitat of the endangered European otter. The occurrence of these animals is regularly evaluated and managed. 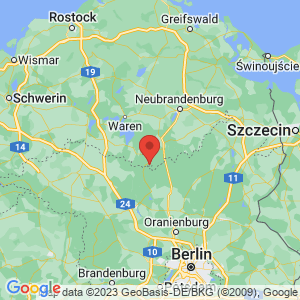