2 OBJECTIVES
i) To offer an opportunity for our youth to develop organisational and leadership skill in overseas community service learning project that can inculcate good values in by community interaction involvement,
ii) To provide a platform for youth to play constructive roles for the community betterment by exposing to cultural differences and attaining global perspectives and knowledge that allows our youths to connect and foster goodwill friendship internationally.
iii) To create a new platform for Scouts between the two countries to support the Messenger of Peace initiatives.

3 PARTICIPATION
Project Sunshine is a new initiative mooted by South Area Rover Scout Roundtable. It is an inaugurated collaboration between the South Area Rovers and The Cambodia Scouts.
A total of 25 participated in this inaugural project consisting 15 Rovers from Cambodia and 10 Rovers and Leaders from Singapore.

4 CONCEPT & PROGRESSION
Project Sunshine is in line with the aims of Messengers of Peace. In general, MOP aimed to inspire young men and women throughout the world to work for the cause of Scouting: Creating a Better World! The initiative promotes young men and women as Leaders for Life – in their communities and across the world.
Project Sunshine 2015 has adopted the Scout Method on this fact-finding and developmental mission, focusing on progressive non-formal learning and educational platform which aims to develop a platform for participative and fun learning environment.

Learning by Doing
For many, this was our first overseas project. We learn to take ownership on allocated tasks by stepping “out of the box” and allowing us to self-develop in area of presentations, communications and organization skills. It allows good succession for aspiring Rovers to take lead role in future projects.

Personal Progression
The project gave us great confidences, offering opportunities for us to develop ourselves. Presentations and communications with people from all walks of life and from different ages groups, helped us develop our confidence.

The Patrol System
The team from Cambodia and Singapore collaborated in patrol system where each member has a forte in a certain aspect. We put the right person for the right job and got the work done.

Symbolic Framework
Despite the language barrier, the Symbolic framework in Scouting kicked. Robert Baden Powell created a song that bonded thousands of scouts from different countries during the first World Jamboree. Similarly, songs were sung and we created a fun atmosphere with the children in the home and high school.

Nature
For the first 3 days, we headed straight to the orphanage centre located in Takeo province which is a 2 hours car ride from the airport. It’s basically back to basics there, sleeping on metal beds with mosquitoes net, showering using well-water, no fan or air-conditioners. This helps to develop one's physical, intellectual, emotional, social and spiritual potential.

Adult Support
The age range in the orphanage centre is from 3 to 15 years old. Our observation revealed that children, who return to the home after school, have nothing much to do in the afternoon other than watching the world walking pass them. They hang around and chit chats with their mates.

We hope to offer activities that interest them. We felt that they may need guidance, someone who can share or talk about their goals in life. Adult support is relevant in this area. The young children easily felt for affection with visitors like us. We wish we can do more for them.

5 WHAT WE HAVE LEARNT
The project had identified the following learning points:
• Developed interdependence and teamwork
• Increase social awareness
• Learn to live together
• Encourage leadership
• Contribute to the communities
• Achieve youth empowerment through learning by doing
• Discover strength
• Engage in finding solutions to problems
• Exchange Scouting's values
• Promote culture of peace
• Learn to face challenges
Day 1
We arrive at Cambodia airport in the afternoon and were greeted warmly by the local team - the scouting way. The journey to the Orphan Centre of Takeo was a bumpy two hours journey. The children there rushed out greeted us upon our arrival. They give us a tour around the Orphan Centre and showed us our rooms. The facilities there were minimal. Metal bed frame, A small fan, a thin mattress and a mosquito net. It was a vast contrast to what we have back home in Singapore.

Dinner time, was simple. White rice, vegetables and soup. The Cambodians tend to have a taste preference of sweet and sour. After dinner we gathered around and share more about ourselves. We taught them the project sunshine songs as well as Singapore scout songs and they taught us their cultural dance. At the end of the day, we took turns to wash up and prepared to turn in for a nights rest. In all, it wasn't as bad as what we were expecting. At least basic necessities were available. The people were friendly heart-warming and the streets were relatively safe. What felt was the lack of affection and attention that these children were lacking.

Day 2
At the opening ceremony, the locals performed their cultured dance for us as their distinguished guests. For the first time I tasked to give a speech for the Cambodian General Secretary. After the speech, we were given an in depth tour around the Orphan Centre. We realised that there are many facilities which were under maintained. There is a garden which can be used to teach the children about plants and their importance in the ecosystem.

The badminton court could have been a place for the children to play sports with better facilities. We found out that many doors are not function properly and the children are sleeping without a proper bed. Most of them sleep on a thin mat over a hard surface. We then had a chance to mingle around with them.
We taught them how to tie friendship band, make a ball out of paper, singing our sunshine project songs and even simple English so they can introduce themselves. I realise that these children are fast learners and are more than willing to learn from us. Compared to our Singaporean students, they are very focused and attentive to learning.

After lunch, we were brought to the Cambodian scouts’ camp site at Chitapich mountain. They showed us how the campsite was managed and what they were preparing for the Japan World Jamb 15. We exchanged songs and laughter as we interacted with them.

After dinner, we began to have games and sing-along with the children. There was an initial communication barrier there as the children could not understand English. But after awhile, everyone was having fun as we sang and dance to the music. It was fun and definitely memorable. The children enjoyed so much that they gave everyone of us hugs as an appreciation. One of them even followed into Melvin’s room after the session ended.

Day 3
We visited the training centre and library of BOOKBRIDGE - a charitable organisation that was setup as a learning centre to bring quality education to the people in the neighbourhood.
Headed back to the Orphan Centre, we continued our activities from yesterday and at the taught them on personal hygiene. We handed them with sticker books, drawing books and colour pens. The children had actually made cards for us. Before we left for Phnom Penh, they give us hugs and kisses as farewell. I can sense that they were reluctant to send us off as this will mean that they will be back to their usual days. I hope that the next time we come back, we can teach them more skills which benefit them in the long run which can change their lifestyle for the better.
I had to return back to Singapore due to work commitment while the team continue their tour. It was an eye opener for me. After months of preparations, I see to what we had experience.

by DarrenTay
from Singapore, il y a 3 années 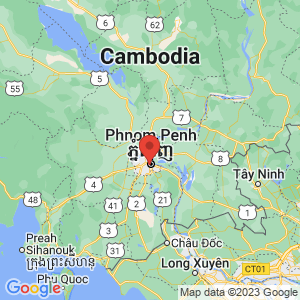